Further Development and Responding to Feedback (part one)

Since our crit I have been hard at work finishing all of the texturing and mapping so I will try and gather my thoughts and post about my recent activities. First of all, I produced the textures for my tentacles. For the skin, I used this time a closeup starfish image: 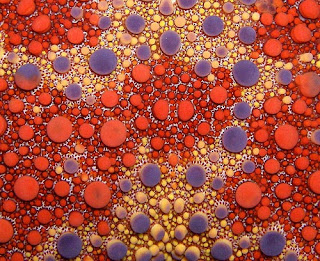 In the Hue and Saturation settings I colorised this skin and applied it to my tentacle UV templates. This meant that I had all of the basic textures for my assets. The next step was to produce both the specular Targa files and the bump maps. For the the specular maps of the log and rock assets I created two images, one being the original, one being a white image on a black backdrop representing the areas which reflect light. I generally crated these images by pixel selecting the moss layer and filling the selection in white on a new layer. Sometimes however, the selected moss was too patchy so the gaussian blur filter was required. Bellow is an example which hopefully illustrates the process I am describing: 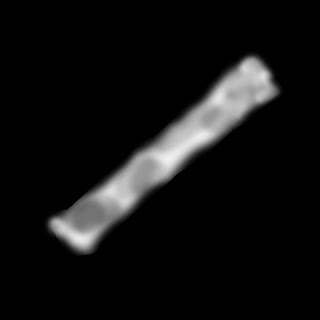 With a jpeg of the original image loaded, on the channels menu I created a new alpha channel. The above image was then pasted into this channel and the image was then saved as a 32 bit Targa file. Creating the bump map channels for the Logs and rocks was fairly simple. With the specular psd file open, I copied the white specular layer. This time, the white acts as a signifier that an area is covered in moss therefore more even and less bumpy. I applied this layer over a desaturated original image. To apply this in Unity, the object shader must be set to specular bump. Two separate textures are required, the first being the Targa file to give the specular shine and then the normal map. I set my bump map texture type to normal map, and told unity to create an alpha map from the grayscale. I also added a green tint through the main and specular colour settings, and adjusted both the shininess and the bumpiness of the normal map to make it more subtle.

The pod and tentacles used a simlar method, althogh this time I created the specular highlights by simply desaturating and then adjusting the levels of the original image, and the bump map image by simply desaturating it. This was adequate for these assets as I am aiming for my craft to appear slimy all over. After importing the assets into unity and applying the specular bump maps however, I found the specular highlights weren't harsh enough meaning the image didn't have that wet exaggerated shine. To alter this, I simply went back to the specular highlight image and made the levels harsher, bringing out the white in the desaturated image. Obviously I then had to recreate the Targa files but the results appear much more glossy which is what I was originally aiming for. Here is an example of the harsh specular map I created for the pod: 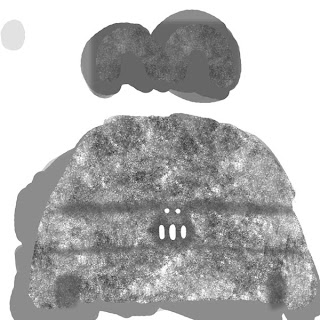 I also felt the ground was looking a bit bare, so after referring back to my concept artwork I decided I would produce a purple and orange floor texture to try and create the effect of tiny rootlike vines spreading from the pod. I began with this image: 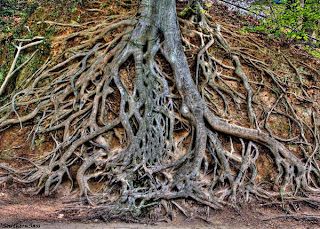 I spent time using the clone stamp and healing brush tool to create a very busy looking texture. I then made this repeatable using the offset filter method shown in an earlier blog post. After colourising this image a similar purple to the pod, I duplicated it and made the new layer orange. I played around with the transparency of this layer along with a none destructive layer mask to achieve a nice balance. I also offset this layer by rotating it to create an even busier looking texture. Here is the result: 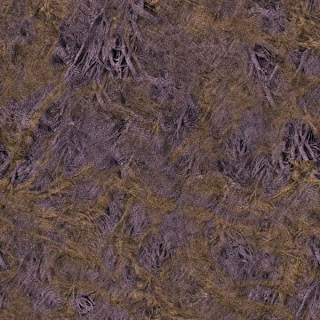 I also created a moss texture using the same image that I applied to my moss covered assets. This was an attempt to make the moss a theme that runs more consistently throughout the level. This seem more realistic as to have reach the assets, the moss would have had to spread along the ground. To further the consistency of the moss, I also applied the moss texture to my original pine tree asset along with specular bump mapping. My directional light now also casts shadows, bellow is a fully mapped out game level: