Constructing my Game Level (part one)

After the initial concept art stage, I felt I was prepared enough to begin modelling my game level and assets. Perhaps unorthodoxly, I decided I would begin by modelling a pine tree asset utilising the UV mapping skills learned previously. I gathered inspiration in the form of moodboards to give an idea of assets I could use to immerse the player into my forest scene: 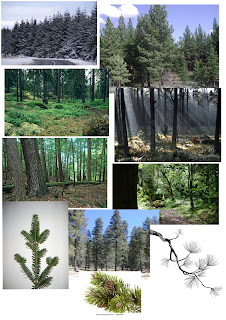 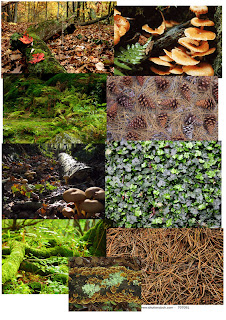 To build my Pine tree asset, I created a simple stump begging with a cylinder containing eight subdivisions to keep the polygon count down. Using the transpose tool I created the tree trunk, slightly twisting and scaling the faces to give a more natural organic look. As the bottom surface of the tree will be grounded, the face was not needed. The same went for the top face which will be too high for the player to see. This meant that cutting the edges and rolling out my UV planar map was made much easier, similarly to the tree we created as an example with our Maya tutor. Bellow is the UV texture made with the healing brush tool to create a seamless bark texture: 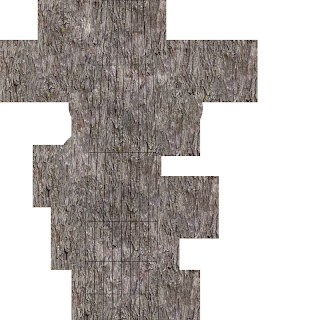 For the leaves and branches, I created flat transparent PNG images to be applied to polygon planes and snapped to my tree trunk. I painted these assets using my graphics tablet taking reference from the above tree moodboard. Here are the assets: 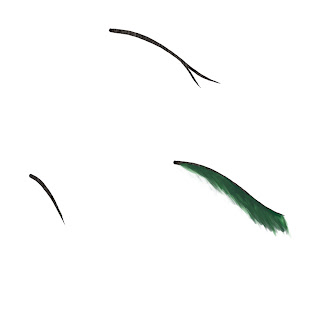 Next, I began to consider my game level space. The first plan of action was to create a rough floor plan highlighting the shape of my environment and how the space will be used: 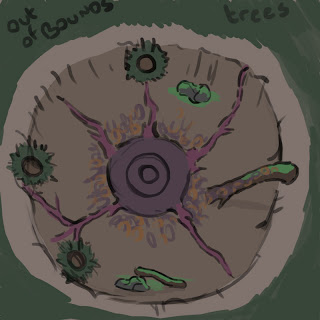 I wanted the show the main body of the UFO as a centre piece for my level. The original plan was to have the vine-like tentacles growing out from the ship and creeping up the trees at the side of the map. Considering this idea more carefully, if a ship was to crash though a pine forest to the forest floor, there would be no solid standing trees within the crater. When entering unity I replaced the upright trees with fallen logs to sell the idea of a crash site more accurately. Also in the original you can see some ideas for rock assets containing moss, inspired by some of the moss covered images on my moodboards.

Using the terrain tool in Unity, I created the large crater. The steep banking also acts as a barrier keeping the player from climbing out the game space. I also applied some basic texturing to the terrain. After doing so, I began blocking out assets to fill out the space. I received some helpful feedback from the person working beside me. He suggest perhaps the crater would not be perfectly rounded and there would be some kind of trail from where the UFO had first made impact (this of course is dependant on the angle of entry, however if the ship was to make vertical impact, the surrounding trees would more likely be blown outwards, emptying the game space and eliminating the fallen logs which help show that the ship is slowly trying to consume the environment. This angle of entry allowed me to design a sort of starting point for the player meaning that the ship is not instantly in full view. This adds to the experience of the game level as the player now must pass through a natural log entrance, revealing the UFO. It was also suggested that perhaps I have the ship tilted as it would be unlikely for the craft to land upright. I also brought the number of tentacles down to just four for a more symmetrical and balanced layout. I added a few of my pine tree assets to see how they looked in Unity. The fallen logs are cylindrical came shapes with per-existing unity textures applied. Here is the original blocked out level: