After speaking to Matt about having trouble getting my animation in to Unity, I was reminded that Unity only recognizes joint animations. I hand keyed selected faces which is bad practice and the same as using deformers which are also not recognized in Unity. This is because I was manipulating components instead  the objects themselves. Another thing which caused problems was that I had completely forgotten about the 'freeze transformations' tool which also resulted in my scaling being off when importing in to unity.

I attempted to animate three of the tentacles. Matt started me off with a nice rig which appeared like a pair of tweezers. Each tentacle contains a top layer of joints which the weight painting influencing just the top of the tentacles. These were the joints which I could rotate and translate to create the pulsating motions. The bottom lear influences the bottom of the object meaning the tentacle stays grounded. These three rigs are parented with a central joint meaning they become a complete rig. Here is a shot of the rig. 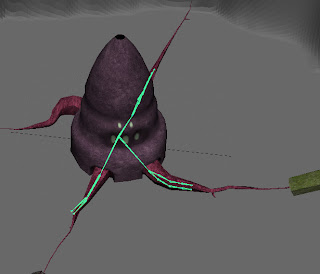 I baked this animation and exported the FBX file. Unfortunately, although the animations now worked in Unity, the upper halves of the tentacles would not stay attached to the logs. This is an error I can't get my head around. Matt posed the theory that perhaps there is influence at the top of the objects. I did flood out each joint black when weight painting, but perhaps there is influence form somewhere else. Reflecting on what could have gone wrong, perhaps I would have benefited from having the tentacles be one object so  that I could better track the influence of the joints. With the deadline very close, having backed animations in my Unity level will have to be something I explore in the future. I do however feel I have taken some positives from the experience. I am now aware that animating with joints and handles is important if animated objects are required in Unity. Also, although I have been using the delete history tool as I go along, the freeze transformations tool is equally as important when trying to keep everything organized and ready to be exported. Here is a level containing the flawed animations: