Working Towards Refining the Organic Spacecraft.

I have recently been exploring further how the UFO in my scene will look. The first element I began to consider was how the tentacles will look, and also how they will appear to consume the trees. At this stage, I also began some loos colour tests to see if any ideas would emerge. I initially had the idea of a purple spacecraft, and I thought a touch of orange might help blend the tentacles into the brown soil. The touch of green slime also helps bring the tentacles into the gloomy scene I produced previously with the light green colour pass. I also attempted a combination of pink and purple, inspired by the 'Covenant' from the 'Halo' game series. The bottom two images consider complimentary colours. The left image still incorporates the purple along with a complimentary yellow. I also reapplied the pink to the suckers, which I were inspired by the octopus tentacle from my sea life moodboard. I have always enjoyed using the warm orange to cool blue colour bridge when painting. This colour scheme is usually effective when showing artificial or candle light against a blue moonlight setting. used simply as the colour scheme for a spacecraft, perhaps the complimentary colours are too bold, and I cannot imagine them within a forest setting. I also attempted adding scattering to a custom brush to create a speckled pattern: 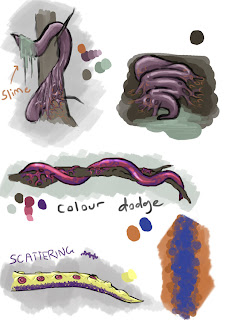 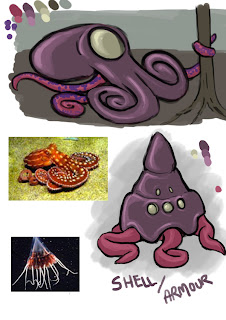 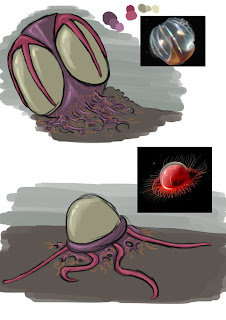 With these designs, I stuck with a purple and pink colour scheme, as I believe that this is the most effective I have tried so far. Studying my moodboard further, I aimed to achieve new interesting shapes. As you can see with third pod-like image, I opted to take out the tentacle idea. The tentacles in my opinion add to this idea of the carrier being a living creature, as I imagine they would require some thought when manoeuvring around the trees. By removing them, this particular design appears more like a static shuttle, rooting itself into the surroundings like the trees themselves. This offers a slightly different approach, yet keeps with the idea of the spacecraft consuming the area around it. 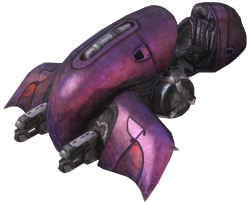