The first permanent photograph was taken by Nicéphore Niépce. This was created by an etching technique, meaning only one photograph could be created. Niépce passed on this knowledge to Louis Daguerre who developed the skills. His method involved the use of a copper plate. Simultaneously, William Henry Fox Talbot was inventing a fixing process, using negatives and chemicals. Using these techniques Virginia Oldoini Countess di Castiglione began photo-documenting her eccentric fashion sense. In essence, she became the first fashion model. Perre-Louise Pierson helped Castigilone capture 700 photographs which the Countess directed herself. Her aim was to project elements of herself in the photograph and record her personal history. One particular photograph was taken of the Countess's bare feet, which was seen as a very sexually suggestive are as women at the time were wearing long skirts. This caused uproar at the time, demonstrating how fashion can have an impact on culture.


Improvements in the halftone printing brought on the age of the fashion magazine, as photographs could be printed in magazines. This came about over the first 10 years of the 1990s, replacing drawn illustrations.


Paul Poiret (1879-1944), was an important figure in the fashion movement. His designs were famous for freeing women form the restricting corset. Edward Steichen was another pivotal figure in high fashion. His style of photography reflected a modernist approach, celebrating the materials and their honest form.


Taking a jump to the 1920s, Cecil Beaton (Who was a member of the 'bright young things'), actually worked designing sets costumes and lighting for Broadway. This meant that his photographs had a very theatrical quality: 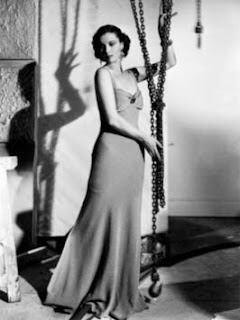 This is an image taken Vivien Leigh for the largely influential fashion magazine 'Vogue.' You can see that with this image, the shadow cast on the wall behind the model is playing a large role in the composition. Conventionally, fashion photographers will try and mask shadows, whereas this image has a much more artistic quality.
Beaton's work revolved around the rich upperclass, which resulted in him becoming a royal photographer taking photographs of Queen Elizabeth III herself.
Lee Miller worked as both a fashion photographer and a model at the age of 19. She went to Paris in 1929 and studied under Man Ray. This meant her work responded to the surrealist moment.
Expanding further on fashion photography as responding to new movements and changes in culture and Society, we looked at David Bailey. His work responded massively to the 'swinging 60s' era. In the context of our course, Bailey's influence on the era was documented in the form of a film titled 'Blow-up.'
Richard Avedon was known for catching his subjects off guard in moments of intimacy. This can be seen in his photograph taken of Tina Turner in 1971: 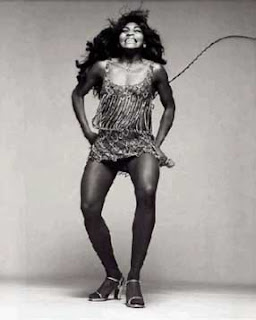 Corrine Day took on a very gritty approach, responding to drug culture. At this time we begin to see artists striving for a more journalistic approaches reflecting imperfect truths.
The introduction of photoshop (First Launched in 2003) brought change to the attitudes and approaches in fashion Photography. Suddenly, people were given the tools to completely alter their images, the possibilities becoming endless. Artists like the UK photographer Night King, embraced this new technology and created highly manipulated images. Again, he was commissioned by 'Vogue' for some of his work, even though his style was so new and extreme. This further shows how fashion remains current, and responds to change. Bellow is an example of Night King's heavily Photoshoped graphics: 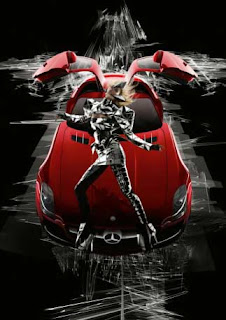 Perhaps one of the most recent cultural movements in fashion is fashion blogging. This movement any one interested in fashion to voice their ideas. Poppy Dinsey launched the blog 'What I Wore Today.' She was a pioneer of the classic pose we see on social network sites, taken in front of a mirror with the camera in frame. This blog grew so popular, a website was launched which allowed enthusiastic viewers to upload their own photographs. This is a fine example of an underground movement launching in to mass popular culture.
contextualizing the lecture in relation to our course, there seems to be this balance where fashion influences the people yet sometimes, fashion responds to changes in society. Like many other art forms, fashion coincides with ever changing popular culture. We see artists like David Bailey responding to the pivotal music era of the 60s. His work embodied the whole culture of the time. When photoshop was introduced, fashion photographers embraced the technology. Fashion Photography, it seems, is a diverse art form which is able to adapt to change. This is the way in which the media has survived over so many decades. This can be see as an example of how we as industry hopefuls, we should try and engage and keep in touch with changes in popular culture and society. It is important to acknowledge these changes so that our work can respond to the context of the current time.
Posted by Andy Bailey DFGA at 06:52