The location will be set in a pine forest, where the player will stumble across an organic looking spacecraft. The UFO will appear almost living, consuming the forest with its tentacles. The craft will not be threatening, but sluggish and vulnerable, like a fallen giant. The tentacles coming from the craft will span out across the map, wrapping around certain tree trunks. The craft will appear slimy with specular bump mapping. The alien aesthetics of the organic ship, drawing from deep-sea life forms, will contrast extremely with the calm static forest.

Time of day: Midday, exterior.
Explanation/ Backstory:
The player is taking a stroll through the forest, when unexpectedly; he stumbles upon a strange alien creature. The creature is actually an alien carrier, yet bears a mind of its own, and with its crew dead it is struggling for its life. With its tentacles it reaches out and desperately clutches at the trees around it, hoping to extract nutrients to prolong its life. As the player, you simply marvel at this dying beast.

These are the points I made while filling out my scenography brief. Although I aiming for a slight sense or unease with the eeriness, I also want to generate a sense of fascination and curiosity with this seemingly non-threatening beast. Imagine being isolated in the middle of a vast ocean, in the presence of a large whale. Although the creature most likely intends no harm, I believe the sheer scale of the creature would probably cause some sense of unease. This is the kind of mood I want to convey. Although the carrier will seem slow and vulnerable, the player will still wonder whether the beast is capable of suddenly lashing out with its tentacles. Still, without any immediate threats, I will likely rely a lot on sound to create this sense of unease. Perhaps very deep breathing with occasional high pitched shrills could help keep the player on edge.
Even now as as I write about my scenography form, I am elaborating more on possible ideas. As my ideas develop and I begin to see them becoming more focused, I will likely re-visit the scenography brief and refine it more thoroughly.
Before I approached my scenography brief, I had to undergo some very early development. I began first by creating a series of mood boards. The first mood board pinned down some possible approaches I could take: 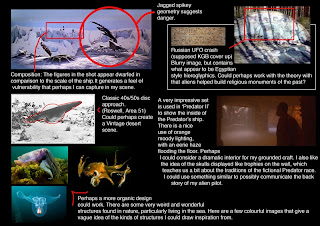 Two of the ideas I thought I could perhaps take further were the organic sea life approach, and the Mayan link between ancient monuments/ artefacts and contact with aliens in the past. The mood boards themselves are very descriptive, and I aimed to explain how all of the images could inspire my project: 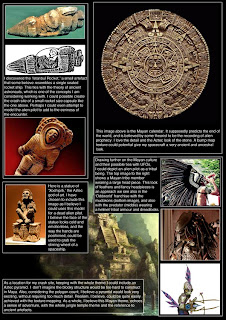 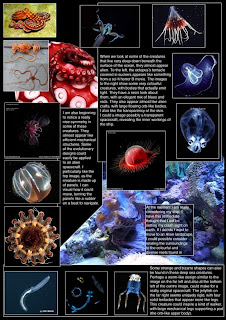 Organic approach.
Out of the two mood boards, I felt the organic concept would be the most original and exciting approach. The Mayan approach would generate a typical 'Indiana Jones' approach in my view with the involvement of artefacts and hieroglyphics. By basing my craft on the strange oranisms that live deep bellow the surface of the ocean, I hope to create a unique and unexpected vision of Alien life. I created some rough initial sketches: 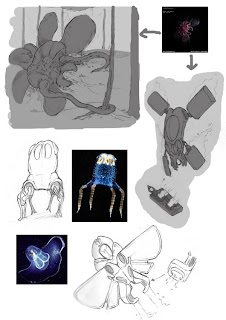 The top idea shows an organic life-form consuming a pine forest. This was the first concept I approached, and the UFO was based strongly on one of the sea creatures from my mood board only with added tentacles to coil around the trees. After reading pages from the 'Computer Game Design Course,' I was intrested by the idea of 'morphic' organic source material into mechanical vehicles. You can see that just to the right of the first image (based on the same creature) There is a shuttle, which uses pannels to stabalize itself and navigate along its chosen path. The head-like structure towards the bottom of the vehicle is based on this image form my organic mood board: 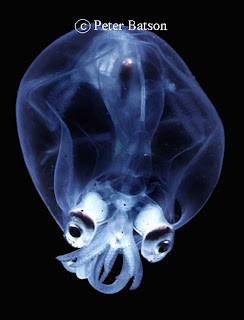 You can also see another two original mood board images in comparison with morphed spacecraft responses. The central image generate a kind of walker, which I can imagine touching down on its feet and navigating across the ground. The other image below generated a flying craft which I can imagine gracefully gliding to achieve stealth.
Although the morphs has potential to be developed, I was drawn back to the idea of a forest being consumed by a living carrier. To capture this image, I produced an early piece on concept art: 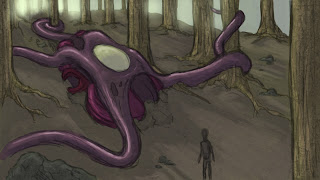 With this digital piece of concept art, I wanted to communicate some of the possible textures which may be involved with my level, and also aimed to show atmospheric lighting. After adding initial colours and textures I used a green pass, fading in and out around certain areas with a non-destructive vector mask layer. With a very soft brush, I then created a layer to emphasize the gloomy light source bursting through the trees at the back of the carrier. I also included a human figure for scale, looking on in awe at the large creature.
So far, I am working with the idea of a forest location being consumed by a living carrier which has crashed into the ground. However, this is only the product of very early initial ideas. I now must refine and build on my ideas by producing more focused concept art. I must consider different possibilities for colour, and also explore the actual environment more.
Posted by Andy Bailey DFGA at 10:25