In my last post regarding concept art, I had the idea of removing the tentacles from one of my designs. I also considered the idea that the alien pod grounds itself like the trees within the forest. I really wanted to expand on this idea, so I replaced the tentacles with tree-like roots with in my opinion the most successful design from my UFO concepts: 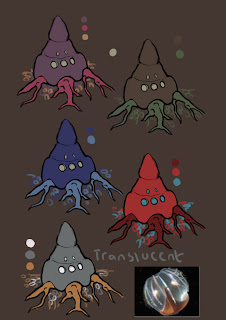 The design itself is simple yet distinctive. The simplicity also seems like a sensible choice when considering my 3D modelling abilities in Maya and also when limiting the polygon count. I also took this opportunity to run some colour tests. The second image uses a green and brown colour scheme to test the idea of the craft fitting in more with the environment. Although I initially said I was going for contrast between the craft and the environment, perhaps the craft could instead compliment its surroundings using a camouflage mechanism. With the middle two images, I was going for an experimental approach, seeing how the use of strong contrasting colours would hold up against the brown background. I like the strong red and blue carrier. Fitting with the idea that this is a living transport, when I see the red and blue intertwining, I think of veins and blood depicted in many diagrams of the human heart. The blue colour scheme works okay and seems fairly balanced, but in my opinion doesn't stand out as striking. Perhaps one of the most successful new colour combinations is the bottom image. Taken from one of the creatures from my sea life moodboard, the orange and grey colour scheme to me seems very strange and alien. Along with the idea of a translucent pod, the bottom craft has a lighter weight quality in comparison with the others. Perhaps by using this colour scheme however, my scene be less like a 'crash' sight, and more like the location where this craft has floated down and began consuming the forest around it.
Posted by Andy Bailey DFGA at 07:09