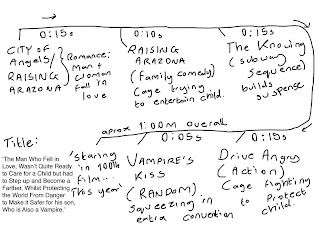 The above timeline shows how I structured my movie trailer. Below is the finished media artifact:

The editing process itself was fairly simple. The only real transition I used was the white colour fade to take the shot of the camera from 'Raising Arazona' into the operating theatre scene from 'City of Angels.' Other than that, I was mainly just considering the order of each shot. I began the sequence by setting up a romantic theme. This then carries in to a family comedy approach where Nic has to raise a child in which he is well out of his depths. Again I tried to convey a this idea of a learning curve and  a personal transformation. This allowed me to make the transition in to an action movie, where Cage must become an action hero to protect his child from  'a world ridden with danger.' Referencing the seemingly increasing popularity of vampires in modern film, I used clips from the 'Vampire's Kiss' movie trailer. This was blatantly added in out of place to emphasize that this theme has been crammed in to reach wider audiences, despite not being particularly relevant to the general plot of the movie trailer.
Overall, I feel my trailer satires a very predictable Hollywood movie. Evidence of individual style is almost obsolete in this piece of media, as it has been alienated by the need to tick all the boxes when it comes winning over gullible mass audiences. I created this media artefact to communicate the common Hollywood approach in modern popular cinema. Although I do believe auteurship still exists even today, film as an art form is often lost in high budget productions marketed at towards the masses.
Posted by Andy Bailey DFGA at 06:29