Communication theory can be genralized by Lasswell's Maxim: "Who says what to whom in what channel with what effect." In a context of practice lecture, we were introduced to the idea of thinking how we communicate to others.


People began considering the importance of communication during the 1940s. It was believed that a poor understanding of how other cultures communicate, led to the atomic bombs being dropped on Japan at the end of the second world war. Although Japan were actually agreeing with the notion of bringing the conflict to a close, it was believed they were refusing to withdraw. This was the main reason people began to try and analyse how we communicate to each other.


There are two main types of communication:


Transimitonal communication considers simply the sending and receiving of information from one mind to another.


Constitutive communication considers how a message's understanding may be limitied by a difference in cultural background or upbringing. Basically, the constitutive approach looks at how levels of understanding can differ due to various reasons.


The information or cybernetic communication theory is based the simple idea of information being sent out and then recieved, with noise becoming a factor in distorting the message. The theory can can depicted by a common diagram showing how a communication system works. The problem with this theory is that it doesn't really consider any limitations in understanding, for example a differing cultural or social background between the sender and the receiver.


The Systems theory begins to catagorize different audience and consider how they may receive information differently. The theory focuses on different classes, and develops strategies to reach specific target audiences. The main advantage of this theory, is that it considers all frames of reference such as maths and science, and believes they can be understood by all classes if communication in different ways.


Another way to consider how ideas or communicated is through understanding semiotics. There are three main kinds of semiotics:


Semantics simply looks at what a sign stands means.


Syntactics considers the relationships between signs, and how they fit under codes.


Pragmatics studies the effect signs have and how to put them to practical use.


Baywatch was a programme that was watched by over one billion people a week in nearly 150 countries. For this reason many have tried to analyse the semiotics the television show contains to find the reasons for its success. Diane Stevenson looked at David Hasselhoff from a semiotics point of view. She believed that he achieved such a high status in popular culure due to his 'physical signifiers.' Everything from his hight and his age to his wavy hair and the sound of voice had a positive effect on the audience of the show.


We were also given task to pick 'text' and use semeiotics to analyse it. I chose this old 'Cola' add: 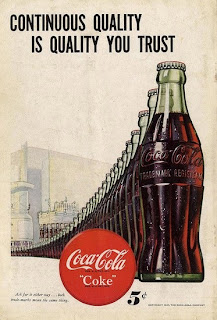 Firstly, we can identify some of the dominant codes used in this image. We have the product itself, along with a red badge containing the 'Coca-Cola' logo. We also have the use of type to communicate a clear message to the audience about the product. Finally, we can look at the composition of the image, the Cola bottles forming a huge line towards the foreground of the poster. Focusing firstly on the inclusion of the product itself, we can assume this is to encourage product recognition. The bottle containing the Cola is very distinctive, making the product stand out from the rest. The red badge containing the Coca-Cola logo communicates authenticity. The company are proud to 'big up' their product and attach their name to it. Although this is in essence self-praise, this red stamp makes the audience feel the product has been awarded some kind of seal of approval. The type at the top of the banner emphasizes this sense of authenticity, and that this product is the real deal. Notice the repetition of 'quality,' in an attempt to further sell the product. If we combine the idea of composition with the placement of the product itself, we turn our focus to this long production line of Cola bottles. In my opinion, this forward looking motion symbolises progression. The perspective of the line of bottles and how the nearest product appears huge and dominant, furthers this sense of growth and success. Overall, the poster echoes a theme of the company 'moving forward.' A feeling that we can trust the quality of this established product is strongly communicated.
The phenomenological tradition suggests that the human body is at the core of how you understand things. The idea suggests understanding comes first with an awareness of  the body. Perhaps one of the earliest forms of understanding we experience is face recognition. How we go on to understand things is a result of human experience.
We also have rhetoric techniques. This is known as the art of persuasion, subcategories of this being synecdoche, hyperbole and irony. A problem with this idea is no-one can actually be sure that rhetoric techniques actually have an effect on an audience. Another technique is the metaphor, which is the method of comparing language to seemingly unrelated things. For example, a ladder is often used to symbolise a climb to reach set goals.
The socioculture tradition is useful when studying the development of a relationship. It considers factors which come under body language like: posture, head movement, eye contact etc. It also considers cultural understanding and context as being crucial to how communication should be formed.
The critical communication theory looks at how media produces encoded messages, and how these messages are decoded and recieved.
As digital film, games and animation students, we are dealing with target audiences when approaching a brief. For this reason, it is important that we are aware of how certain visual information may be received differently based on the context of our audience. Also, as aspiring workers in the creative industries, it is important that we communicate successfully to potential employers reading our blogs. When we are posting, we must consider the tone in which we write and how it will project us as individuals.
Posted by Andy Bailey DFGA at 12:09