"The 'design process' refers to the ideal way in which a computer game should come together- from the first ideas to the finished code handed over for manufacturing." Reading further into the 'Computer Game Design Course,' I learned that there are several possible sources for game ideas:


'Existing intellectual property' means an idea that already exists. This could relate to say a transmedia character being adapted from a comic book or cartoon series into a video game character. This is a popular approach in the game industry today, as the process means that you are not breaching any copyright laws trying to come up with an entirely new concept.


'Similar theme,' is the idea of taking a successful game idea from a rival company, and adapting it so that it is a new product. Some argue this is a very uncreative approach, but sometimes the re-imagined version can be better than the original. This then drives the original company to try and make an even more successful game.


One of the process I found interesting was the 'mix and match' process, where you ask yourself 'what if?' The result is often a crossover of genres creating very edgy and original ideas. This concept makes reminds me of the film Ridley Scott's 'Blade Runner,' which takes the classic film noir genre, and places it in a gritty science fiction setting. 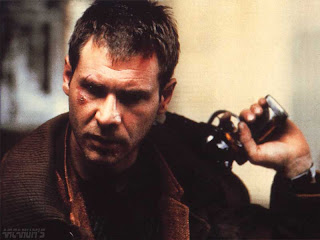 The examples of vide games listed in the book,which are the result of this approach were 'Lego Star Wars,' and 'Warhammer 40,000: Dawn of War.


An approach which often never produces an idea that reaches the production stage, is the 'brand new idea.' It is hard to generate an entirely new and original idea, and an attempted new idea will often be seen as a poor attempt at competing with a well established video game franchise. However, ideas that are generated over the process could be used in the future when following some of the other processes.


This particular section of the book also talked about specific roles and their levels of contribution throughout the production process. The designers play a large role at the start of the process, coming up with the games direction, concepts, and also the game's mechanics. The Artists also play a large creative role at the start of the process, creating concept art and developing the digital identity of the game. The programmer around this stage begins developing the game engine and mechanics. Now the animator is introduced, creating digital models with rigs, and both in-game animations and cut scenes. Before the game development begins, the sound engineer begins producing sound effects and music, which is very important in the modern day game industry. Once the development phase begins, the game testers begin playing the levels and looking for bugs and loopholes that allow players to cheat. This is a relitivley low paying job, but is a good way to get in to the industry. The testers play a large role at the very end of production before the game can be sent out. The managers play a consistent role throughout all of the process. These roles are often filled by someone who has had a lot of experience in the industry, as they oversee the entire production. There is often a manager, with other managers beneath him in the individual teams.


By developing an understanding of how established games companies approach game production, it can hopefully be translated on some level to this current module. Although I will be working as an individual and not as part of a team, I can approach each stage in a sensible order to help my ideas develop smoothly.


Before jumping in to the development stage, it is important to first conduct some research to establish a solid concept. This way, any early designs will not be lost by a drastic change of direction.


One way of refinfing ideas, is to find games which are similar and play and asessing them. Find what works well and also what works not so wall, as well as reading reviews. By gaining an understanding of what has made a game successful and also perhaps where it is flawed, you can begin pin down some solid ideas.


Another way to conduct research to influence your ideas, is to keep in touch with what is happening in the world news and popular trends. If you can identify something which is growing increasingly in popularity before it is exploited by the mass market and translate it into a video game, you may be on to an innovative idea. News websites are a good source for inspiration as well as Wikipedia. Generally, it is important to stay up to date with changes in popular culture and also to constantly broaden your your knowledge of interesting concepts and ideas.


To confirm that you have a solid idea, there are certain questions that you should be able to answer. Firstly, can you describe the game? You should able to communicate the idea behind you game in a short paragraph. You should also be able to summarise the story behind your game. The ability to do this will influence how well your idea is sold to both publishers or design teams. You should also have in mind the platform of your game. Which consoles will it run best on? How will you idea translate across various platforms, if intended? Also, It is important to have the genre of your game decided. This also helps establish exactly what the game is about. A target audience should also be decided on, so that through the entire process your audience can be considered.


I have already began some initial concept art/ mood boards. Perhaps it would be a good idea for me to begin to really pin down my ideas so that I can establish a clear art direction. This way, I will not waste too much time changing my ideas. Although not all of the questions above will be crucial for my task of simply creating one small game level, they will likely influence my ideas and how approach the task. I need to consider audience, genre and the back story of scene so that I can develop an understanding of what it would be like to actually work in the industry.


When beginning the production, it is essential to break down the game idea so that you can identify each of its component's development needs. The book listed six categories which apply generally to most games, however, they may vary.


The asset artwork entails both digital and tradition methods, producing character, level and vehicle designs (to name just a few) which can be later used by the modellers and animators to produce three dimensional assets.


The interface covers on screen information, for example, a heads-up display. This should reflect the theme of the game and also the mood, enhancing the player's experience. The interface is first introduced with the main menu, before the player even immerses themselves in the actually gameplay. A captivating menu I imagine, will likely engage the player therefore would be important in establishes a good first impression of the game.


A lot of time and focus must be spent on the story, especially if the aim is to produce a cinematic action game. Game players are not fooled by careless and rushed plot lines, therefore it is crucial to approach the process as if planning a film or novel. This process may also involve planning out the trials that the player may go through during the game.


The game mechanics are also crucial to the way that the player experiences the gameplay. If the mechanics are over-complicated, the reception of the game will likely be poor. In my opinion, a good example of game mechanics would be the simple to use cover system in the 'Gears of War' franchise. the player simple needs to tap a single button near an object to lock in to cover. The aim function causes the player to lean out and take aim, and fire button applies as normal. By pulling the fire trigger whilst still behind cover, enables the player to blind fire. This means the player is still well protected, although not as accurate with their aim. There is also a subtle use of vibration in the controller as the player slams into cover, emulating the heavy armour that the in-game character is wearing. This helps further immerse the player in the game and become absorbed by the feel of the virtual world. 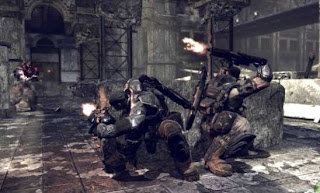 The level design is also an important part of the game concept. The level designer's role is to create a series of challenges for the player to complete throughout the game. The difficulty of the levels generally increases as the game progresses.
The final concept is the game audio. The sound of a game is also crucial in enhancing the player's experience. The designers role is to suggest possible sounds and ideas for music that the specialist musicians and sound engineers can work with.
Although for this module, our task is on a minuscule scale in comparison to the proper game industry and their processes. Still, we do have to consider the art direction, the back story, the level design and finally the audio. By breaking down these aspects, I can ensure that I have them in mind throughout the process. It would be quite easy to make the mistake of spending most of the time modelling the actual level and forgetting about the sound, which is of equal importance in creating the mood of my setting.
Posted by Andy Bailey DFGA at 10:32