For a group film project, we have been asked to produce two short films responding to a poem about the Ilkley Moor as part of the Ilkey literature festival. The first poem which was given to us, is titled 'Sulking Winds' and has a running theme of harsh erratic winds. One of the lines which immediately caught our attention was 'I see the dead man's shadow as he speaks with the voice of Odin...' Because of this we have chosen to take a Norse route and film our short on location at the Ilkley Moor. I have been assigned the role of creating a detailed storyboard, and creating the eerie sounds to be used in the video. Here is an original draft of the storyboard. The idea is that the main character in the short film founds an old tattered book at a tall stone structure (one which we are aware of at the Ilkley Moor). When the book is opened a Runic chant and strong gust of wind hits the character's face, causing him to drop the book on to the ground. Using a stop motion animation, ruins such as pillars will begin to grow from the book. when the character looks up form the book, Odin's throne room has generated around him. Odin now opens his mouth and creates these strong winds that blow over the Moor. This was the original idea: 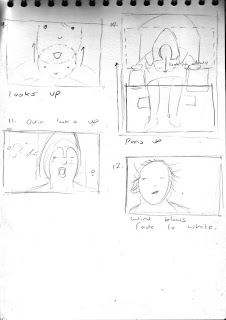 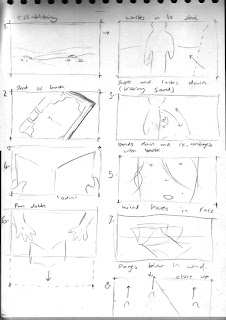 After producing this rough storyboard, I next created a revised and more detailed version: 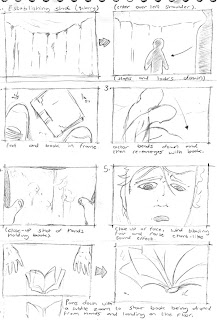 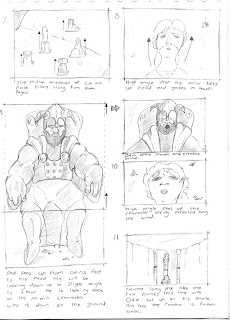 After reviewing this polished story board with Luca, who is in charge of the visual effects, we discussed some missing transition shots which could be added to make the sequence more followable, and also considered a more climactic ending where the thrown room falls before the main character. Here a rough revision of the original story board: 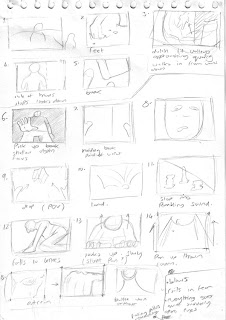 I plan on producing this more considered storyboard and pitching it to the rest of the ground, making further changes if needed based on the feedback I receive from the others.
Posted by Andy Bailey DFGA at 05:08