We were recently introduced to 'Maya' for our 3D modelling and animation module. Our first task was to follow a step-by-step tutorial and create a small truck. Although the three dimensional model was in essence very simple, I at first found this new software very hard to work with and tedious. There were certain commands such as the grid snapping and moving the pivot position which I struggled to understand early in the process. Also I often got confused with the left right and middle mouse click functions. Although this task took me a while to complete and was frustrating at first, I believe it really helped me understand some of the fundamental modelling skills in maya such as working with faces and vertexes, and also working in multiple views. I found it important to utilise the different camera views when attempting to line up objects accurately, and the perspective view was useful when assessing the model as a whole. Here is my original model: 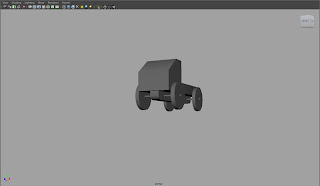 After completing the first model, we were encouraged to add to the truck as we pleased. As I had already spent a lot of time on the tutorial and at this point I was still finding Maya quiet confusing, I opted for a simple approach. I simple added a small trailer onto the truck, making it appear more like a van. Here is the result: 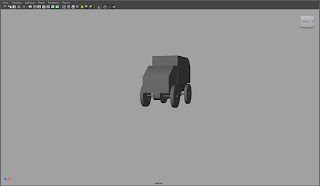 With our truck model, we moved on to the process of animating. We began simple, translating our object into different positions and setting key frames on the timeline. I found this fairly straight forward and attempted to produce a sliding truck by translating and adding a slight rotation to the object to show the back end of the object swinging in to the turn. Here is the result:

As well as this, we produced a simple swinging pendulum. We used a similar process of adding in the key frames. This time however we used the graph editor to add a sense of a hang at the top of each directional swing. This made the animation look much more smooth and realistic. Again at this point this point I was finding the process fairly steady and nice to follow. Here is the first swinging pendulum:

This next exercise was where the process became difficult and confusing. We were next given the task (still following a tutorial) to animate a second swinging pendulum with joints. I will begin by showing a screen shot of the finished graph editor:

Because the second pendulum had joints, the outside fragment had to finish it's swing last, at the point where the fragment closer to the pivot had to be already beginning a downward swing in the other direction. to keep this animation smooth and flowing we had to extend the curve by selecting the infinity option. I found it very difficult to emulate the curve in the tutorial and still now believe I would struggle to create this smooth swinging motion. I plan to experiment more thoroughly with the graph editor and improve my understanding of it when we begin animating our character. For now though, here is the second pendulum:

Finally, we followed instructions on how to create a CV curve, giving our objects a motion path. As I produced this at home and didn't have my truck model on my external hard drive, I created a quick and simply vehicle model to travel along the track. This techniques was fairly simple to follow and I was very interested by the quickness of the process. I believe this technique could be very handy for smooth flowing objects such as vehicles or objects that hover, but perhaps would not work quiet as well with a walking animation as there is a constant smooth gliding tempo which could look un-realistic. Here is the finished animation:

So far I still believe there are fundamental elements I find difficult to understand, the graph editor being one. I do feel however I am beginning to grasp basic modelling fundamentals, which could obviously still be expanded on. I have though, acquired a student version of Maya on my personal computer and plan on experimenting with modelling and animation to build on my understanding of the fundamental tools within the software.
Posted by Andy Bailey DFGA at 11:44

Email ThisBlogThis!Share to TwitterShare to FacebookShare to Pinterest
Labels: OUDF405