Building on on our understanding of modelling and animating in Maya, we were introduced to a few new tools. Firstly, we were given a brief introduction on using nonlinear deformers. by manipulating these deformers and setting key frames on the timeline, there are many smooth animations that can be achieved. With this knowledge, I was eager to try out a squash and stretch animation using a simple sphere shape. I would firstly like to slightly digress and show an animation of a solid heavy sphere being dropped. I created this animation by applying key frames on the timeline, and levelling out the top of each ark in the graph editor to add a very subtle hang before each downward transition. notice how each bounce becomes smaller until the ball is stationary:

Here is a screen shot of the graph editor showing the curves, each time growing slightly shorter and not as high as the last: 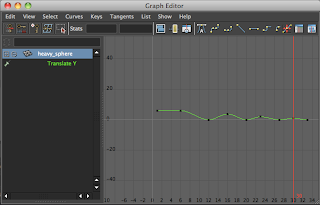 Now compare the hard ball to this exaggerated squash and stretch ball I created using a squash nonlinear deformer:

I like the over emphasised cartoon-like bounce using the squash deformer. It is perhaps something I will incorporate in my character animation in the very near future.

Building further on our understanding of Maya, we also looked at the Hypershade tool. I added a football texture to the ball and a grass textured plane for the ball to bounce on. I also experimented with lighting briefly, which is not visible in the following play blast:

Looking deeper in to the Hypershade tool, we also tried some UV mapping. I found this stone paving image from a google search and used it to create the texture for a cube. here is the jpeg net: To add realism, a greyscale version of the above texture was added to the bump mapping layer to add the illusion of depth and texture: 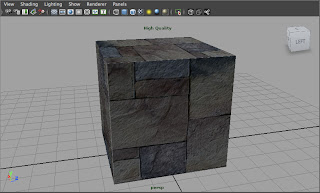 I really was impressed with how the quick and easy application of a bumping map image made the stone block look so realistic and textured. To emphasise the realism even more, I added some moody lighting to the image. I took inspiration from the orange to blue colour bridge in art colour theory. This meant that the colours worked together and complimented each other. also the warm orange really jumps out from the cool blue, added exaggerated depth. here is a screen shot: I found the UV mapping process very fascinating and feel I could really use it to create realism when modelling my character.
Posted by Andy Bailey DFGA at 13:32

Email ThisBlogThis!Share to TwitterShare to FacebookShare to Pinterest
Labels: OUDF405