There were many new wave movements including the British Italian and Swedish movement to name but  a few. The aim of French new wave cinema was to break away from the established Hollywood traditions. Many of the main filmmakers within the movement started out as critics, meaning many of the films at the time of the movement were created by intellectuals. Some of the leading directors who helped shape new wave cinema were Jean-luc Godard, François Truffaut, Claude Chabrol, Jacques Rivette and Eric Rohmer, all of whom began themselves as film critics.

The first significant film in French new wave cinema was 'La Pointe Courte' (1954) created by Anges Varda. It is interesting to note that the first film to come out of this convention breaking movement was from a female director. Instantly we began to see this idea of a powerful male auteur figure being challenged. Also the film took a less expensive approach, being filmed in black and white. The cast was a mix of both established actors and people being asked to play roles from the streets. As a result, the film wasn't portraying a great fantasy, but reflecting ordinary urban life.

Other countries responded to this approach in film. There are notable Italian film makers within the new wave movement such as Federico Fellini, Michael Antonioni and Pier Paolo Pasolini. Filmmakers were beginning to realise that they didn't have to have the most expensive equipment to produce a movie. Directors began finding ways to create interesting shots, an example being filming on the back of a moving car as oppose to an expensive camera track. 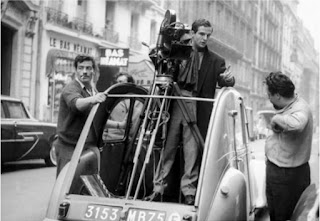 Many of the film makers who were part of the new wave movement actually went from film critics to being considered auteurs. One could quite easily argue that there original take on how films should be presented revolutionised film. It allowed directors to break away from the high production costs of the 'cinema of quality' approach. Instead of pricey Hollywood sets, many New wave films were filmed on location, utilising the sounds in the backdrop instead of clear overdubs. The whole approach was against shooting movies in studios and the editing process was also much more driving in new wave films due to the cheaper quality cameras.
Because of American Settlers during the second world war, there was a fascination with American culture and particularly the 'Film Noir' genre. This American influence in new wave film further added to the very life like and honest approach as Film Noir focuses on crime and is set mostly on the streets of America. The characters in film noir also appear mostly in contemporary dress, speaking in a colloquial street manner, unlike many Hollywood actors who began their career on stage speaking with clear diction. We see the lead female actress in the new wave movie 'Breathless' dressing very casually, far from how we would have expect to see a Hollywood actor presented: 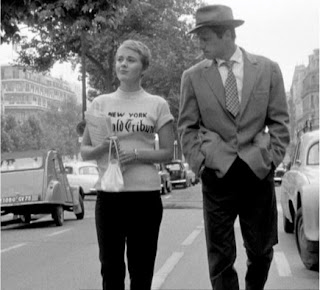 Jean-Paul Belmondo was also a famous new wave film actor who attempted to emulate an American film star, showing this great influence from American culture. He too stared in 'Breathless': 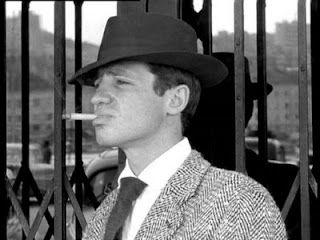 Jean Seberg (the actress above) even raised the question 'what is french culture'? It was believed by some that the french were taking on American culture to the point where  was Americanisms being used in colloquial dialect such as the reference to 'la weekend'.
On the subject of the characters in new wave film, many of the protagonists were flawed, again challenging the Hollywood convention of the flawless hero. The new wave protagonists have been described as being aimless, stylish and sometimes acting silly. They could also be cowardly and sometimes amoral, and show mood shifts such as boredom and infatuation.
Considering the style of French new wave cinema, the approach to editing again challenged the Hollywood conventions. There are jump cuts, where sudden jumps to shots, which may seem irrelevant in relation to the current subject, surprise the viewer and evoke reflection on the shots meaning and place within the sequence. There are also points where you find sound and dialogue overlapping, where it is the actor outside of the frame who is actually speaking. There were also very stylistic references, such as the presence of characters wearing sunglasses. In new wave film sunglasses were seen as dividers from the rest of the world. They created a sense of distance, used mainly on characters who were being portrayed as either isolated or as celebrities, more powerful that the average person. 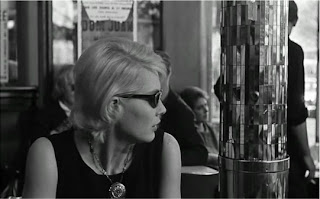 In context, it seems that French new wave cinema really broke the mould. Referring back to the auteur, there is a great sense of individuality and expressionism with the movement. This idea of resourcefulness and individual flare can really be applied to any area of film games and animation. The art direction also proves again that ideas are of equal importance to the money thrown at a feature. Many Hollywood movies display cutting edge visual effects, yet struggle to relate to the audience as the character development sometimes falls flat. The Film makers who shaped the new wave movement we're considered auteurs as a result of their unique approach to film making in an era where expensive Hollywood productions and A list actors and actresses  were dominating the film industry. It is the commitment to produce a quality film with a low budget that still inspires independent filmmakers and most likely game designers and animators to produce successful work.
Posted by Andy Bailey DFGA at 07:05