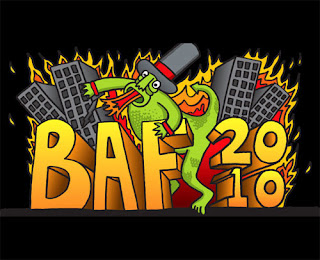 In November 2011, the Bradford media centre hosted the annual BAF or Bradford animation festival. Over the first two days, BAF game also ran alongside the main festival where figures in the gaming industry came in share their knowledge and discuss the future of gaming.
During the first day, which took place in the media centre, we were given strong insight in to the industry, hearing form both indie game companies and games designers who have worked on much larger projects. We heard from 'Hand Circus,' a London based indie game company founded in 2008 who are now producing titles for leading platforms such as the play station 3. We were also prompted to consider new platforms by the indie company 'Six to Start' who create apps that tell stories. The company produced an 'augmented audio running game' app, set in a zombie apocalypse where the listener plays a runner searching for supplies and completes small missions. In my opinion, this was a very interesting concept to consider, as many mainstream game titles fall short of a well thought out and immersive story-line. It was great to hear from the small game companies, as they began simply with an idea and reached out for funding and support. It was solely the quality of their ideas that earned them support and their was no funding from the get go. We see franchises like 'Call of Duty' constantly releasing hugely successful titles purely because of the label on the box. This reaches the point where the games become more like a brand that people associate with quality, even though the games are perhaps not as original and well considered as the titles indie game companies must think of to maintain success.


We were also given an interesting speech regarding the failure to produce successful games in the area of learning and education. The speaker Carlton Reeve discussed what attracts us toward video games. He spoke of how educational games do not truly engage an audience as you cannot 'fail' at them. It is the frustration of failure and wanting to achieve that drives a person to immerse themselves in a game. He also explained how research has shown that the only thing a person can take from a game, is the knowledge of how to play the game better. This seemed to raise controversy within the lecture hall as people argued about enhanced reactions and their own children being engaged by such games which the speaker referred to as 'epic fails.' I myself had to agree with Carlton Reeves. The argument about increased reactions are really only relevant when playing a game and developing a response to certain visual cues. Also most educational games, although they may help learning, cannot really call themselves games. They are just information disguised as games by presenting buttons and moving images. They do not capture the true thrill of gaming, as there are no challenging goals that cause the player to want to complete them.


The second day gave a much greater insight in to working on projects of a much larger scale. We were also given more of a look at the cutting edge side of gaming technology. We had already seen both the 'Faceware' technology form 'Image Metrics', and the 'Cat & Mouse: Animating the Animal' lecture from the people who worked on both 'Kinectimals' and 'Kinect Disneyland Adventure' on the first day. This time however, we heard from 'ten 24', the 3D modelling company who create 3D scans used notably used on the 'Dead Island' promotional trailer. Brendan McNamara from 'Team Bondi' who was responsible for 'LA Noir' also gave a speech. He presented early tests of the groundbreaking face capture technology used in the game and showed scenes from the game in comparison with the actual live actors. Although perhaps not being the most impressive lecture of the day, I did reflect on a lecture given on the motion capture process in the new 'Goldeneye: Reloaded' title. There was lots of live action used in the game's cutscenes, filmed with handheld cameras. In the motion capture space, actors played out the scenes in real time, most of the process reminiscent of a film set. With this in mind, it is clear to see why our course operates in the way it does. It seems with all of the motion capture technology incorporating real actors in to video games, the industry is really striving for realism. With cutscenes becoming evermore prominent in games and a generally more cinematic approach being taken, it is not hard to understand how film comes hand in hand with games. Animators are now considering shot compositions and camera movement. It will be interesting to see the level of realism achieved in years to come, and how the roles in the industry will change. Will hand keyed animation become a thing of the past? Will there be a higher demand for actors and film directors rather than 3D designers and animators in the gaming industry? Will games of the future become hyper realistic, presented as interactive movies? These are the questions that I was left to dwell on after the two day event.
Posted by Andy Bailey DFGA at 07:30

Email ThisBlogThis!Share to TwitterShare to FacebookShare to Pinterest
Labels: OUDF402