I began the process of working out shot framing for my instructional video by producing some rough sketches: 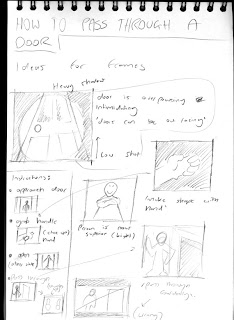 I was going for a very efficient approach, with bold and clear close-ups displaying the actions required to open a door. I had the idea for the lighting to be also very bold, lighting what is important to focus on within the video, planning also on keeping the background limited and empty to avoid distracting the viewer from the actual instructions. Here is the detailed final storyboard, considering how the cuts between frames will make each action being performed clear to the viewer. 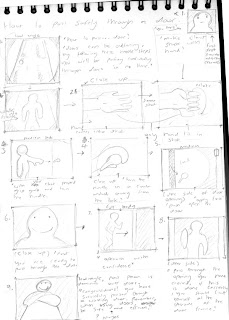 I have also included rough ideas for dialogue within the final storyboard. I have also attempted to display some ideas for lighting, and the actor's movements. The storyboard however, mainly has emphasis on shot framing.
Posted by Andy Bailey DFGA at 07:13

Email ThisBlogThis!Share to TwitterShare to FacebookShare to Pinterest
Labels: how to, OUDF404