We have been asked to purchase the book 'The Computer Game Design Course' by Jim Thompson. To inform us about the processes of game development, we have been given certain pages to read independently. Bellow is a brief summary of the sections I have regarding idea and concept development.


This section was all about seeking out inspiration. As gamers who sample many different platforms and genres regularly, it is very easy to repeat an existing idea. A way of thinking outside of what already exists within the game world, is to seek out new experiences as well as simply playing games. The section of the book also listed some groundbreaking approaches that spawned critically acclaimed games. 'Deus Ex' gave the player the decision to move through the game levels through violent or non-violent means. This role playing element, where the player makes moral choices, was likely inspired by the developer's history with tabletop role-playing games. The game also referenced real-life locations, such as 'a dirty, dark and threatening version of Hong Kong.'


The case study that really interested me was the one that looked at Shigeru Miyamoto and his childhood bug collection. It was his hobby of exploring the outdoor landscape and collecting small insects, that spawned 'Pikmin' and 'Pokemon.' Pikmin was set in a 'dangerous' garden gameworld, whereas with Pokemon, the goal was to collect creatures to to engage with others in conflict. It is interesting consider how a childhood hobby spawned such original and successful ideas.


It is also important to keep a sketchbook, which can be used to stick in cutouts of images that inspire you almost like a scrap book, and to also to sketch any ideas that enter your mind. The section encouraged the study of real life photographs (including human anatomy), to make your own concepts more 'physically credible.' The sketchbook was described as a place where 'you can let your imagination run riot.'


Another revolutionary game concept was in 'Call of Duty 2' where instead of collecting health packs, the player (when shot) became fatigued, his vision blurred with a blood red border developing around the edges of the screen. By doing this, the player felt the impact of being shot, and was encouraged to take cover to recuperate his health. This encouraged more tactical game playing, as oppose to running in towards a health pack. The message behind this short study was to not dismiss an idea immediately because it has already been done, but to assess why the game element exists, and then to seek out an innovative approach.


When thinking of innovative game approaches, I am reminded of 'Pokemon Snap,' a game I used to play as a child. The platform was essentially a rail shooter, yet the objective was to take photographs of rare Pokemon in the wild. Each photograph was awarded points based on factors such as the rareness of the Pokemon and the framing of the shot, which combined the shooter platform with the experience of photography. This gave the game a certain unique edge, with a completely original idea as far as I am aware. This idea of capturing photographs and being awarded points based on the quality of the shot, was later used in the game 'Dead Rising.' With this game however, the ability to photograph was only a small feature and the shots were scored instantly, whereas in 'Pokemon snap' shots taken were graded at the end of each level. In my opinion, this shows how existing ideas can be taken further, and should not be dismissed immediately. Although 'Snap' was a rail shooter the inclusion of photography made it captivating, and it encouraged a fascination with nature in the younger audience. 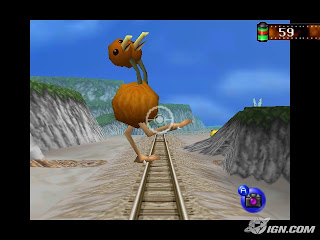 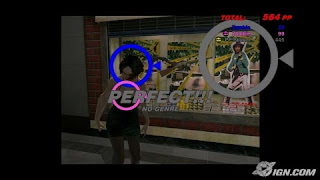 The final point made in the section was that there is a place for independent games developers outside the mainstream market. In fact, some games that start as small indie games, become part of the mass market either in their original form or as adaptations. Three games mentioned 'Katamari Damacy,' 'Rag Doll Kung Fu,' and 'Darwinia,' were all spawned from the 'Indie Game Jam,' an event were independent game developers meet up to develop 'off-the-wall' ideas in a short time. One independent game that has reached out to a mass audience is Notch's 'Minecraft.' The game began as a sandbox platform inspired by a game called 'Infiniminer.' It has gradually developed in to  a hugely original game, where players now defend themselves from 'mobs' (enemies) explore huge cave systems and alternate dimensions, and produce complex creations with redstone circuits. Because the game was released independently online, Notch was able to take his time with the Beta, gradually releasing patched before the official release of the game. The game however, reaches mass audiences whilst still in the testing process. Now, huge companies like Microsoft have recognized the success of the indie game, and are buying into games like 'Fortress craft,' developed by 'Projectorgames,' which aims to replicate Notch's ideas as closely as possible, but with fancy textures the ability to play as your Xbox Avatar. 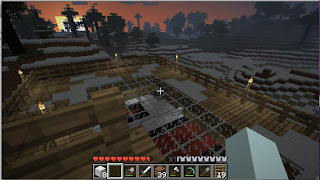 'Minecraft'
With these pages, I have taken away the idea of exploring other ideas and philosophies outside of gaming to inspire new game ideas. Also, I have obtained the knowledge that existing ideas can be shaped into exiting new concepts.
Gathering Materials:
Another aspect of the design process is gathering materials. The section acknowledged that the internet is a great source for images and ideas. On top of this it spoke about game design site called 'The Gamasurtra,' which contains articles written by game designers offering insight into the processes involved. As well as the internet however, there are other sources for inspiration. The section of the book raised the interesting point that inspiration can be found everywhere around us. As game developers, it would be wise to carry a digital camera and sketchbook with us at all times, incase say a piece of architecture catches our attention. Steven Spielberg after all, had the idea for the design of the mothership in 'Close Encounters of The Third Kind,' after seeing the pattern of the Loss Angeles street lights at night:

The Mothership
Another interesting concept mentioned was morphing. This taking something physical for example a bug, and using it to inspire the form of an armoured spaceship. A fine example of this would be the 'Scarab' from the 'Halo' game series. The large covenant vehicle was a beetle-like armoured body, and pointed insect-like legs: 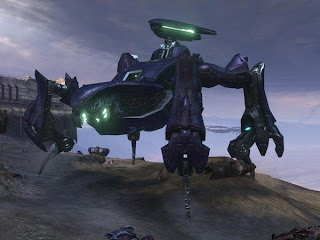 The final element that designers use for visual reference is the mood board. This is a collection of images  and words that communicate ideas such as emotion, colour, and composition. The mood board underlines the original concept, meaning it can be referred back to make sure that the designers ideas are on track and moving in the right direction.
Overall, I have learned that it is important to be constantly exploring and seeking out inspiration. Inspiration itself can come in many forms, wether it be from nature or architecture. It is important as a designer to gather as much visual references as possible to aid the design process and help generate new ideas. I now plan on purchasing a sketchbook and beginning to collect visual references for my game level. I have began mood boarding some possible approaches, and plan on moving towards refining my ideas with sketches and further research.
Posted by Andy Bailey DFGA at 08:10