Fitting with the title 'Little and Large', here is my storyboard: 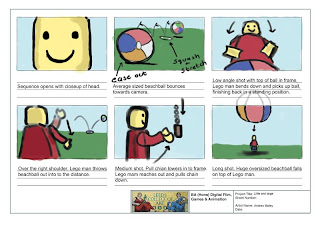 In my animation, I plan for my character to be met by a small beach ball. The Lego man will then toss this out of the frame. After this, a small pull chain will drop and my character will curiously pull it. This will result in a giant beach ball falling on top of him. The 'Little and Large' concept comes with the slapstick nature of the small and then hugely oversized beach ball.
I initially had the idea of using a beach ball in my animation, as I enjoy working with the squash and stretch diformer. This is also an opportunity to demonstrate squash and stretch as an animation fundamental. The 'ease in ease out' fundamental will also be covered as the ball slows to a stop in the second shot. I believe I will also be able to show anticipation as my lego man lifts the smaller ball and prepares to throw it. However, after presenting the story board, the point was raised that it may be hard to achieve the motion of my character bending down, picking up the first beach ball and then throwing it. It was suggested that perhaps using a kicking motion could still be successful, yet easier to animate. In response to this I plan on producing two tests, one that keeps the original idea of throwing the ball, one using the kick.
After gaining feedback on my storyboard, it was time to begin the testing process. The first step was to produce the surface, which later will become part of the environment. I felt I needed this surface to keep everything grounded and on the same level. I sometimes find that using the grid on Maya can be less effective than a solid plane. I had the idea of producing a lego surface with the cylindrical connecters spread evenly over the plane. I thought however that this might be tedious to achieve the small cylinders, so instead I used UV and bump mapping. Here is the result: 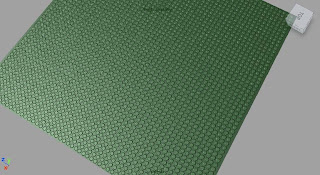 The next stage was to produce the beach ball. Again I used UV mapping and a subtle bump map: 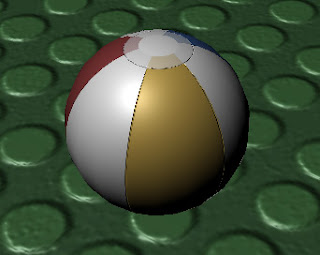 I managed to animate my Lego man bending down, taking hold and then lifting the beach ball. To achieve this, for the bending down motion I grouped all of the upper body down to the hips and crotch joint of my Lego man. I then moved the pivot point holding 'D' on the keyboard to the centre of the crotch joint. This enabled me to get a turning motion where realistically a Lego Man would bend. For the movement of the arms, I grouped the left and right arm together. Again, I then moved the pivot point to the centre of the shoulders. This meant the arms kept in position in relation to the upper body. Keeping the arms in position I then animated my Lego man to stand up. After this I simply moved the beach ball in to position, keeping it in time with the hands as best I could. Then with the upper body set back to the 0 position, I animated a final lifting rotation of the arms. Again I tried to mimic this movement with the ball. Here is a Playblast of the finished result:

It seems however that my maya timeline plays back too quickly. This is why the animation here is very slow and drawn out when Playblasted and also rendered. I could either re-animate this part or I could speed it up in post production. Nevertheless, hopefully this shows an effective picking up motion. I now need to animate my Lego man throwing the beach ball. Once this is complete I can create a kick animation and compare the two.
Posted by Andy Bailey DFGA at 05:34