A History of Type

Typography is a tool for both visual and verbal communication. It can by summarised by meta communication (the tone), paralinguistics (pitch, volume, fluency) and Kinesics (How it's delivered).
There are six main classifications of type. In our lecture on the 'History of type', we took a look at all of the classifications through time:


The Type movement really started with the 'Late Age of Print.' This began around 1450, with Gutenberg's printing press. In our language, All of the capital letters come from Roman script, famously found on 'Trajan's Collumn' dating back to 113AD. The lowercase letters derive from medieval script used by Monks.


Humanist:
This was the first typeface to emerge. The aim of the Humanist type movement was to produce a type that incorporated roman and gothic script, yet was legible for print. Humanist fonts are characterised by slated crossed 'e's, little contrast between strokes as you can see with the 'M' in the diagram bellow, and an even vertical height between the lowercase and then the capital letters.

Geoffroy Tory believed that the Alphabet should reflect the human form. He suggested the cross in the 'A' should be positioned where it would cover the 'man's organ of generation.' This is rather pretentious way to look at Type, showing however that some did see it already as a form of art.


Old style:
This typeface emerged in the period of the 'Enlightenment'. People were beginning to turn to science instead of religion, meaning writing became more rational and efficient. Louis Simonneau created type based on quasi-scientific lines, whereas John Baskerville created type with such contrast between thick and thin lines, some criticised he would 'blind' his readers. This contrasts with the idea of sense and efficiency. Overall, at this period type really became a distinct art form, moving away from emulating human handwriting. We see in the image bellow the gradual vertical straightening of the 'O' through the Old style and transitional movement: 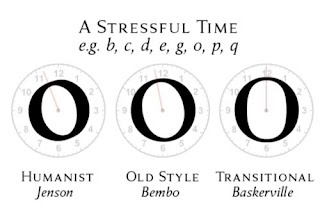 Modern/ Didone:
This typeface is summarised by a high stroke contrast, a steep vertical axis, abrupt serifs, horizontal stress and a small aperture. This style of font is used often in fashion magazines, as it is seen as slick and elegant.

Slab serif/ Egyptian:
This style of type emerged in the 1800's. It was designed for loud posters with the aim of standing out amongst a dense crowed. Fat faced fonts echoed slab serif, but were used also in print. As well as this, there is also the type (typewriter) slab serif seen below: 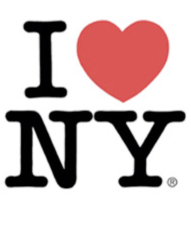 Sans Serif:
Possible the most used typeface around today, Sans serif bears a modernist 'form over function' approach. A strong example of this would be 'Akzidenz Grotesk' which was released by the Berthold Type Foundry in 1986:

You can see clearly the simplicity of the font, looking to achieve order and rationality. Herbert bayer even tried to drop the uppercase by creating a font consisting of only lowercase letters with 'Bayer' in 2925. 'Gill sans' created by Eric Gill in 1926 has a similar simplistic approach and was so clear and legible, it was used by 'Penguin Books' as their printing typeface.
We also see a post modern approach within the sans serif movement. Times New Roman, created in 1932 is a post modern response to an old typeface. Similar is the gothic font by Johann Christian Bauer which was used by the Third Reich until 1941.
Helvetica (1957) is perhaps one of the most used typefaces to emerge form the movement, and has become a symbol of corporate capitalism. We see the font being used everyone from brand logos to street signs. Ariel was a font commissioned by Microsoft to mimic Helvetica, as they did not want to have to pay the licence fee to use the actual font on their machines. 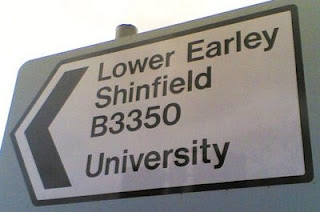 Again Helvetica reflects simplicity and legibility. The font is clear and efficient, meaning it is ideal for road signs.
There are also some D.I.Y movements in type. We see grunge fonts that defy all of the conventional rules laid down in typegrophy. Designers combine various fonts and tear and scratch their work. There is the use on ransom notes consisting of cut out news paper letters, again completely going against the efficient and sensible sans serif movement. We even have the avant garde graphic designer Jonathan Barnbrook, who spoke out again pretension found in type by creating the 'Bastard' font. The font suggests anyone who uses it is a bastard. 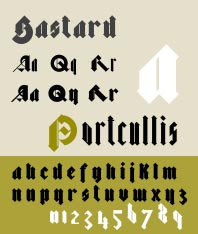 In the context of our course 'DFGA', Type demonstrates a visual means for communication. Type, which I often overlook, can have a strong effect on an audience. Something as simple as the font used on our blogs can either win over or deter readers. I choose 'Verdana', as the spacing between the letters makes the text clear and legible, but I never really considered how strongly some may feel about the type face. I believe the strongest message I took from the lecture was that every choice must be considered. When we approach a piece of media, the typeface we choose is helping to communicate our message. If I were to write my blog posts in capitals, IT WOULD APPEAR AS IF I WERE TRYING TO SHOUT AT MY AUDIENCE. This links back to paralinguistic. In conclusion, type is an important tool for visual communication and must be considered carefully.
Posted by Andy Bailey DFGA at 08:23