Much of this lecture involved the 'avant-garde'. This phrase is used often in popular culture to describe the innovative pioneer. Consider Marcel Duchamp and his famous urinal exhibition piece. He was seen as innovative because he made people ask the question: What makes a piece of art? Does one simply have to display an object in a gallery for it to become art work. Also the fauvism movement consisted of self taught loose painters, who challenged conventional painting techniques with loud abstract colours and heavy brush strokes. When this idea of the avant-garde emerges, what often happens is artists begin to experiment for the sake of it. Art Critic Clement Greenberg noted this as 'Art for art's sake'. It almost becomes fashionable for artists to be radical and unpredictable. Some begin to believe that they possess a hidden creative genius that is being deprived of appreciation from a narrow minded society. This idea is known as 'Elitism'. Eventually an attitude is developed that everything must be original and groundbreaking.


Traditional art was never about expressive style. It often had the function of recording a landscape or a portrait, the job cameras are used for today. It would more than likely be people of the High Culture who would be able to afford lessons in painting. They would then be commission by the wealthy to paint them a portrait. The Low Culture refers to the 'popular culture.' This is where the avant-garde begins to emerge. There are two main approaches within the Low Culture towards art. Some believe that their work can change the world, others prefer to move away from politics. Clive Bell was against narrative and politics in his work, instead focusing on significant form. This is the idea of combining lines and colours to 'move someone aesthetically.' Another strong example of this would be the highly expressive style of Jackson Pollock. His work was built up of various markings and strange colour combinations to convey certain emotions in his work, or so some might say. Here is an example of his work titled 'Lavender Mist': 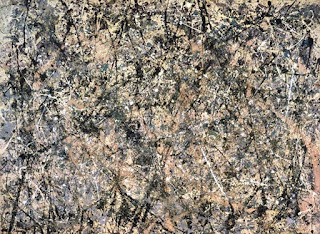 You can see there is no recognisable form within the painting, it is simply a combination of shapes and colours. An extreme example in the other political direction, would be the protest performance by Chris Burden, where he had himself shot in the arm in an art gallery to make a statement against war:
With these very expressive and conceptual approaches, comes the rejection of what is known as Kitsch. Kitsch is mass produced art work, an example being prints of famous pieces of art being sold on mugs or plates. Thomas Kinkade produces detailed paintings to be printed and sold on mugs, making a living from creating Kitsch. But where is the line drawn between Kitch and true art? Take Damian Hirst's shark instalment 'The Physical Impossibility of Death in the Mind of Someone Living.' In this case the artist had no physical input towards the piece, the shark had to be shipped in by a team of people. Smilarly to some of the work of Roy Liechtenstein where he has his understudies re-print a frame from a comic book large to be displayed, I believe some of Hirst's work is almost mocking the art world. People begin painting large fortunes for pieces that are intended as a dig at the snobbery circling around art. When Tracy Emin created her 'My Bed' instalment, two men sabotaged the gallery piece by jumping inside the bed and having a pillow fight. By doing this they themselves in essence became the avant-garde, speaking out against the emerging 'Art for art's sake' approach. 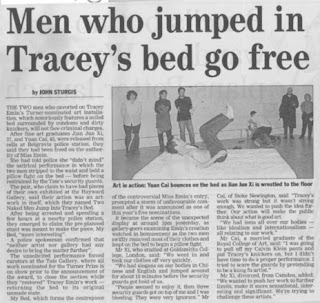 Similarly, the K foundation 'worst artist of the year' award presented a cash prize of £40,000 to Rachel Whiteread in 1993. This prize exceeded the £20,000 tuner prize, undermining the established art award.
In the context of our course, we see this High and Low class divide in many medias. We have Hollywood budget action movies with the simple function of entertaining a large general audience, and then in contrast we have abstract films like 'Eraser Head' by David Lynch which are very thought provoking and surreal, taking on a more Low Culture approach. In games we almost have Kitsch arcade formats which are re-produced time and time again. Arcade games often re-emerge with the very basic function of engaging the player. There is often a simple scoring system and the player aims to climb the leaderboard and achieve a high score. In contrast with this we have very abstract games like 'LSD' created from the artist's dream journal. In this game there is no real objective or scoring system, the player just wonders around this surreal and disturbing world. Like art found in Low culture, this video game challenges the conventions of the media. It seems that in all medias, there are these clashing approaches. We often have the mass produced High culture content, challenged by the avant-garde. It could be argued whether this is a good thing however. Experimental approaches can sometimes disstort the artist's original intentions and can often alienate an audience.
Posted by Andy Bailey DFGA at 09:22