When arriving at the Leeds City Museum, I found that my camera was out of charge. In a way I am glad of the outcome as I was forced to build on my visual recording skills. I have scanned some of my sketch book pages, showing my recordings: 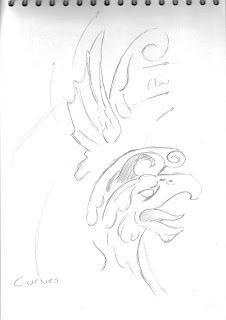 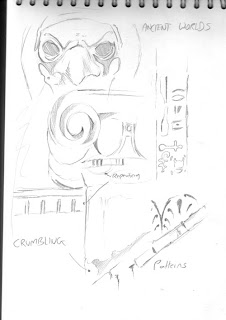 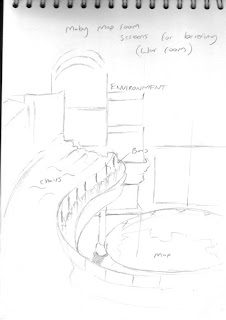 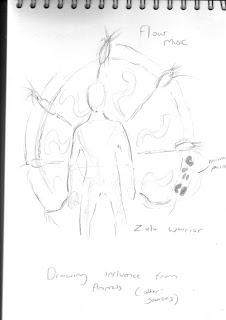 I was firstly engaged by some of the ancient world pieces. The sculptures and the ruins displayed both smooth flowing curves, simple repeating patters, and jagged crumbling stone. I found there was a great variety in the shapes making up some of the historical relics, as shown by the top two sketchbook pages. Surprisingly, there was also a great amount of detail in some of the pieces, even more so when imagining old traditional methods. The colourful costumes in one of the exhibits, in my opinion displayed relevance to motion and rhythm . I depicted one of the costumes, shown by the bottom left sketchbook page entitled 'Zulu Warrior.' There was a very lively and colorful vibe to this particular exhibit, drawing influence from such things as animals and mythological creatures. It was the very flamboyant curves and colourful materials making up the costumes that suggested both sound and movement. My final recording was of the main lobby location, which had an ampi theater-like design displaying a large map painted on the ground. When I looked down from the elevated seating area, I could almost imagine a kind of war briefing room, with tactics being discussed over the large map. Again the circular shape of the room was consistent throughout, followed by curving balconies and wall pieces. I believe that (like Jay Hawkins 3D modelling clip) it is important to consider balance and aesthetics with the careful use of shapes. This understanding of aesthetics was even present in the ancient world relics.
Posted by Andy Bailey DFGA at 08:14