I have begun the process of drawing my character. I have produced a moody full profile image and also a focus on the face and head of 'Bob.' 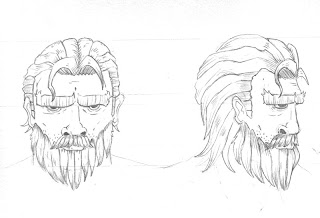 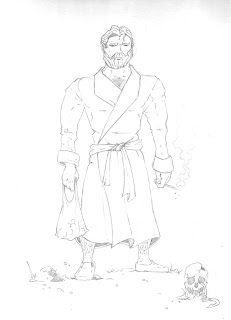 The main concept for my character 'Bob Callahan,' is that he is an unexpected hero. He is not dressed for combat, he simply left the house to call at his local shop and has found him self caught up in an epic campaign. Through all of the action he will face, he will remain clueless throughout, very unaffected. It is this quality that gives him a fearless edge. He is depicted in a dressing gown and slippers, unshaven and unashamed. To expand on 'Bob's' design, I plan on equipping him with a very large ancient weapon, based on the source material gathered from my museum visit. Perhaps I will give him a huge clobbering fist, similar to 'Hellboy's' massive stone fist, yet covered in hieroglyphics and ancient markings. I imagine bob wielding a blunt weapon as oppose to a firearm, as he has no prior experience with weaponry, he will however take physical action if his personal space is invaded.
Posted by Andy Bailey DFGA at 08:51