As you can see through previous mood boards, the science fiction movie 'Blade Runner' has had an influence on my dingy future concept. Mead is a futurist designer and concept artist, who's website can be found via the following link: http://sydmead.com/v/11/


Interestingly, contrasting with his grim vision for 'Blade Runner,' Mead's work generally isn't so bleak. Lot's of his work has a great chrome look to it, very reflective and sparkling. He actually presents quite a clean flawless vision of the future in images such as this one: 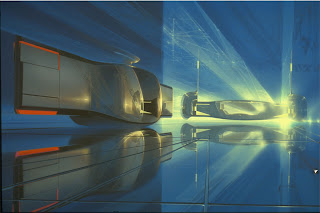 This image also demonstrates great one point perspective, which is relevant to my environment render. On top of this, the cool blue colour scheme contrasting with the yellow lighting in the distance, draws our eyes down what appears to be some kind of road for vehicles. The image is in no way flat and really invites us in to the scene. There is also just a touch of warm red to the left of the image, which adds balance to the painting. 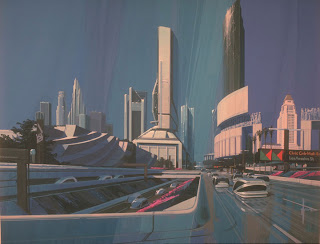 Mead also had a background providing architectural renderings, which shows in highly detailed and accurate images such as this vision of a futuristic city.
Overall, I am captivated by Mead's highly detailed futuristic environments. His concept art spans across a great collection of films, some examples being Aliens (another personal favorite), and also Tron.
Posted by Andy Bailey DFGA at 03:57

Email ThisBlogThis!Share to TwitterShare to FacebookShare to Pinterest
Labels: OUDF403