Some argue that Graffiti can date back to the cave paintings discovered in France, Lascaux (1940). There is also evidence of Graffiti on the Roman ruins from Pompey, depicting a politician of the time. Even during the second world war, 'Killroy was here' was marked on the war memorial in Washington D.C. soon becoming a pop culture symbol adopted by others. Also, with politics comes graffiti. During the riots in France during may 1968 over civil unrest, posters reading 'we are the power' were hung around the streets, encouraging unity and power towards the people.

So what exactly is Graffiti? In essence it is the voice of the streets. It is the means of the people saying 'we are here.' For this reason we see Graffiti present in Hip Hop culture, where people, for example,  from certain 'Ghettos' may feel that the government is letting them down by turning a blind eye on their state of poverty and oppression. Graffiti often makes a statement, which is plane for all to see. Artists such as 'Banksy' are known for speaking out against capitalism and corruption. The Berlin wall is famous for its roll as a canvas, spawning masses of political graffiti. 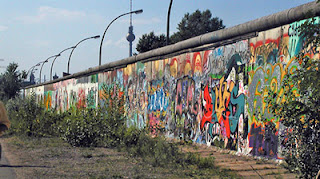 We can also see this theme of graffiti in popular culture spanning through medias such as advertising and Game. TATS CRU produced an add for Coca-Cola in 1997, which suggests a 'trendy' use for street art and expressionism. Arguably, the idea of graffiti being used to promote such a major corporation could differ from street art's original intention of speaking out against class divide and capitalism. However, graffiti really fits in with Digital film, Games and Animation when it comes in to games such as 'Bomb the World' (2004) and 'Jet Set Radio' (2000-2003). You are also given the ability to 'tag' your territory in 'Grand Theft Auto, San Andreas.' I believe it is the relationship between a fascination with gaining a voice and leaving behind your presence through street art, and the ability to interact and make choices in such games, which makes the two medias fit hand in hand. It is because of this awe behind street art, that it spans across so many different medias. Take for example this piece by Blu, making use a stop motion animation method:
Because of the popular appeal of this style of graffiti, the 'Blu' look was recreated by computer for use in a knife crime advert: Link I believe this is where street art comes in to film and animation. It is a great example of how a type of art form can gain a firm place in popular culture, and be applied to other medias to reach out and engage a vast audience. Graffiti holds a feel of expressionism and rebelling. It suggests freedom to speak out from the streets against higher power and authority. Looking at street art in this way, it is clear to see why it has a place in film, games and animation, where both political and social narratives are concerned.
Posted by Andy Bailey DFGA at 08:50