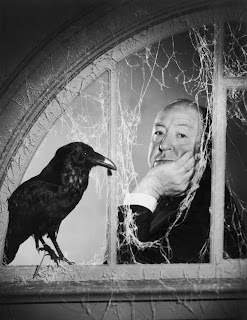 An auteur, in film, is a director who has complete creative control over his work. Very much like an artist in the traditional sense, the auteur molds his film and often stamps it with his own original style. To give us a true idea of what defines the 'auteur,' we looked at Alfred Hitchcock in our first of three film lectures.
Hitchcock had a very long spanning career in film. in the 1920s he joined the film industry, drawing sets. The experience would make very knowledgeable and competent when it came to producing his own movies. When he first began producing features, film was still in the silent era, meaning that for the audience to follow his movies, Hitchcock had to be clever and innovative. Even  back when he was creating silent films, he was establishing himself as the 'master of suspense.' His first movie, 'the lodger,' created in 1927, carried a theme of murder and was an immediate example of Hitchcock's very expressionistic and arty approach with his clever uses of lighting and shot composition. On one particular scene, Hitchcock cleverly shows a man pacing up and down on the floor above the actors in the shot. To do this he filmed the man pacing on a glass surface from beneath, later layering the shots to create a ghostly figure pacing over the hanging lights on the ceiling. Because he wasn't able to work with sound and re-create foot steps, this was his way of getting around the limitations.
Some of Hitchcock's innovative shot techniques still inspire film makers today such as his point of view shots or 'stalker cam,' and most notably, the 'dolly zoom'. The dolly zoom has gained various names since it's debut such as 'the vertigo zoom,' and 'the Hitchcock zoom,' and was first used in the movie 'Vertigo' to create the effect of disorientation and a fear of heights. bellow is the example (skip to two minutes):

The strange pulling yet subtly zooming effect created, in  my opinion both generates the idea of falling, whilst at the same time emphasizing the height from the ground. It truly is nauseating and almost places you right in the scene.

It is not only the original and innovative camera techniques that define Hitchcock's style. There are certain themes that run through his movies. He often included elements relating to psychology and the dark corner of the human mind. This is reflected through the sets designed by Salvador Dali in 'Spellbound'. The fact of Hitchcock collaborating with an artist shows his understanding of fine art and explains the surrealism and expressionism we see in many of his films.

He also liked to cast blonde females in his features, as he claimed they were like 'virgin snow' waiting to have blood stamped on to them. He was also noted by theorist Donald Spoto, for including birds as a running theme throughout his film, examples of this being 'Jamaican Inn,' 'Psyco' and 'The Birds.' It is believed birds were used to symbolize doom and a coming threat. Hitchcock also liked to play small cameo roles in his own movies, very much like when an artist signs a painting. Other themes which run through Hitchcock's work include chaos, sexual guilt and desire, and the search for ones identity.

Although the auteur is highly praised, there are also critiques with the theory. Funding independent film makers can mean that amateurs wind up producing feature films. also the idea of one creative mind producing a movie can disguise the work of others such as the cinematographer, art director, editor etc... Also, some see the 'auteur' as a capitalist device, the auteur's name becoming a selling point to the mainstream. This relates to Barthes' theory of 'the death of the author.' Is it The auteur who establish themselves as genius, or the writers who rave about their work and label them as innovators.

In my opinion the auteur represents creative freedom. In the context of film games and animation, I am reminded of the independent game developer, who's visions are not altered or censored by a team of writers and producers. There is also an enormous link between film and game as games continue to become ever more cinematic. With gaming technology constantly becoming more accessible, we may begin to see the auteur emerging in Game. The Game 'Stranglehold' is a fantastic example of the auteur moving over into a different format, as we see Jon Woo's signature style adapted in to a video game.
Posted by Andy Bailey DFGA at 23:52